Many Lives Are Touched When One Life is Helped

“How many fingers can you see now?”

That’s what Dr. Sheppard asked Bob a few hours after his surgery.

Just hours earlier, he hadn’t been able to see anything. After surgery, he could clearly see the four fingers Dr. Sheppard was holding up.

“I went from zero to four fingers just like that! He gave me my life back.” 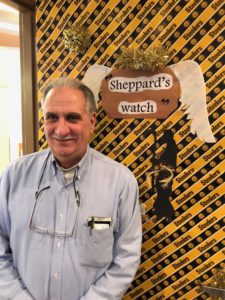 Bob’s vision began to deteriorate three years ago, around the time he turned 70. He sought help from many doctors before being referred to Dr. Sheppard.

“He diagnosed me right away and knew just what to do. I know I am in the very best hands I could ever be in.”

Bob has several issues with his eyes including glaucoma, retinal scarring and corneal swelling. His cornea had become so swollen that it was significantly affecting his vision.  Dr. Sheppard performed a partial thickness corneal transplant on his right eye which significantly reduced the swelling and improved his vision.

Before coming to Virginia Eye Consultants, Bob had become so worried he was going blind, he’d started to invest in voice-activated computer technology so he’d be ready for the day when he lost his sight.

“I truly feel I have gained 20 years back to my life. I’m smiling again.  I’m laughing and joking.  I can see again.”

He is a master diver and loves to teach and work with kids in the Outer Banks, where he retired after a career working with Ocean Rescue.

“I can’t wait to get back in the water.”

But first, he’s spending his Christmas helping people in his community who need a little support over the holiday. Support  that Bob would not be able to give without his vision.

Many lives are touched when one life is helped. Thank you, Bob, for everything you do for the people in your community!  You make the world a better place and we’re honored to have you as part of our Virginia Eye Consultants family.