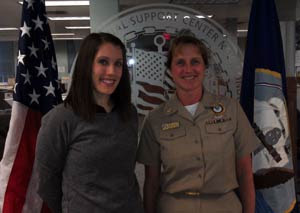 Imagine viewing life every day as if you were looking through a foggy window. The figures are blurred and nearly impossible to make out. You squint as you strain to focus in on the image. With 20/400 vision, this perception was a reality for Kristen. For as long as she can remember, Kristen has had poor, unclear vision.

Fortunately for Kristen, she was able to wear contacts throughout her youth so she wasn’t often troubled from the problems that arise from wearing glasses during sports and other physical activities. “To be honest,” she claims, “LASIK or PRK was something I wouldn’t have thought to have if I had not been interested in becoming a pilot.” In high school, Kristen first became interested in aviation. She continued to pursue this interest in college, graduating with a degree in Aeronautical Engineering.

Kristen quickly learned that designing and constructing aircraft was never going to fully satisfy her true passion. “I have the kind of personality that likes to ‘do’. I found myself craving more action and even more involvement.” It was around this time that she became determined to make her dream a reality. “At this point, I had made up my mind. I was going to be a pilot, and I wouldn’t let my poor vision be an obstacle.”

She set out to clear her largest hurdle by researching vision correction practices along the East Coast. “Ultimately,” she claims, “I chose to fly from New London, CT, to Norfolk, VA, because of the level of comfort I felt with Virginia Eye Consultants. Your sight is so important. You never want to take any risk with your vision.”

Upon arrival, the first thing she noticed was the friendliness of the staff. “I’m from the North, so I really noticed a sense of southern hospitality. The staff even offered me food on several occasions!” Kristen says. 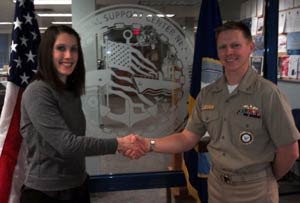 Kristen recalls her PRK experience on December 9, 2010. “Dr. Scoper did my PRK procedure and walked me through each step. It took about ten to fifteen minutes per eye, and I felt no pain.”

Fast-forward a little over a year and Kristen is thrilled to report that she has maintained 20/15 vision since the procedure, is now completely free of contacts and glasses and has recently been recommended as a Student Naval Aviator and will attend Officer Candidate School this spring. “My favorite thing about my new vision, besides the fact that I am now able to become a pilot, is that my daily routine is much quicker. I literally don’t have to sweat the small stuff. Oh, and it’s much less expensive!”

Congratulations, Kristen, and may you soar to new heights in all that you do.